THE HOUSE IN THE GARDEN

Our client has a garden, in the garden he has a house, but he can’t fit himself into the house. In addition, he doesn't like the house, so we have to redraw it. The garden is close to Prague in a beautiful forest area. There is a pond nearby and the surrounding lands are also gardens, in short, peace and quiet where you look. The garden has almost 800 m2 and is full of mature ornamental trees. The foundations of the existing building are 10 x 11 m and are sufficiently dimensioned for the construction of a new house. The whole building is in unsatisfactory condition, so it will be demolished. Fortunately, all utilities are already connected to this original building.

The task sounded simple this time, and in addition we were given a relatively free hand, which is very easy to get used to in our studio. ‘Create a weekend house for two people with the possibility of accommodating friends for a short time. Preserve the garden, build a pool and parking area for 2-3 vehicles. At least partially use the already existing foundations.’

Already on the first sketch, I drew a ground-floor bungalow with a green roof so that the building was drowned as much as possible in the surrounding greenery. The roof conceived , so in that way it corresponds very well to the façade of the façade, which is formed by massive larch boards, which are tanned by the flame on the surface. The wood thus acquires a natural surface protection. The rich glazing connects the interior with the exterior. Thanks to the permitted buildability, we enlarged the new building by a few meters, and used the entire area for the living area of this ground-floor brick house.

The interior space is clearly divided into day and night direct corridor zones.At the entrance to the house, this corridor leads along the entire length of the house and at the end of it there is a French window into the green. The floor plan of the corridor is copied by the glazed skylight in the roof so that the division of the house into both parts is even more obvious. The monolithic roof is partially supported by a brick core in the middle of the house, in which there is a technical background and a toilet. We then covered the outdoor relaxation zone in the form of a terrace with a pergola made of solid wooden prisms. The challenge was to request a pool. We were looking for a suitable place throughout the garden, until at the end, as always, the simplest option won. We designed the pool under the pergola, strengthened the perimeter foundation of the house, so that the edge of the pool copies the glazed facade of the living space. During a party, it is possible to jump into the pool from the living room :-) 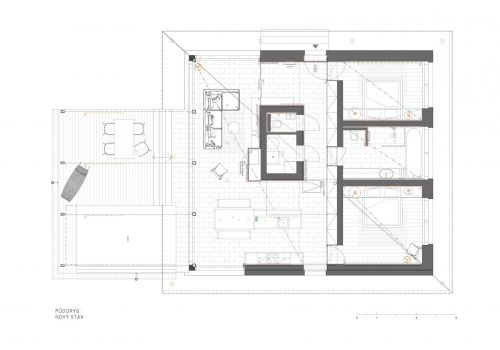 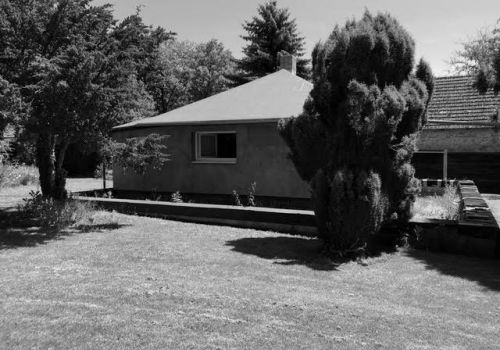