Interesting projects are often born in Karlín, Prague, both from an architectural point of view and thanks to the very fact that it is Karlín. Only, as the classic song goes, has his "Karlín black soul" changed into a "dancing soul" in the recent years. They are the souls of all Karlín property owners looking at the local price map. A shareholder of one of the new residential house projects came to us with an assignment that was clear. “Proper industrial apartment, but not very industrial. My family and I will live in it, but maybe the tenants as well..” And now, buddy (Bara), illuminate us…

The basis was to create a very sober to austere space, where its main feature will be its functionality and views outside. The area of the apartment is about 100 m2, its layout is about 6 m narrow and over 16 m long. Such an elongated layout may initially seem like a handicap, but in the end the apartment was logically divided into a daily and a private zone. The apartment is located on the top floor facing the river, so another quality lies in the beautiful views of the greenery and the river.

The whole living space is dominated by a raw reinforced concrete ceiling. In the middle of the apartment, where there are bathrooms, dressing rooms and a hallway, there is a plasterboard ceiling.

In addition to the central air conditioning, the whole house also has recuperation, so the technological networks in the ceilings are very dense, so we could not use our favorite barrisol ceiling for lighting in the middle part. In order to bring at least a little light into the rooms in the core of the apartment, we designed some parts of the walls from luxfere blocks.
As a counterweight to the ceiling, we chose a wooden three-layer floor, which, however, is smoked, so it has a beautiful gray color. Below it is a full-area underfloor heating. We also intended to use the flooring for the production of some pieces of furniture, such as a table or a bed; in the living room, the entire wall is lined with this wood. Glass bricks partitions in the middle part of the apartment support the industriality of the whole space, but mainly illuminate and lighten it. We covered the other vertical structures with an old, well-known and always working concrete trowel.The basic idea within the living room was not to disturb the view outside. It is because of this unique view that the television has a secondary place in the interior. The lighting is indirect or surface-mounted so that nothing hangs in the space. We only allowed ourselves to install a metal rail on the ceiling, in which a hanging rocking chair rides, in which the owner can relax not only at the library, but it is also possible to move it in front of the television.

In our projects, the furniture is complemented by the obligatory concept of benches at the dining table, complemented by minimalist chairs. On the walls hang metal structures serving as shelves and at the same time a module for indirect lighting. The kitchen is conceived as a combination of gray and white laminate, which also form cabinets in other parts of the apartment.
After a long day, the owner can stop for a drink (s) at the bar and then continue straight to the library in the corner of the room, where he falls asleep peacefully in the shade of the books. 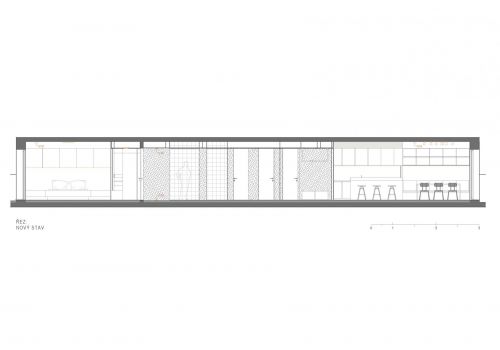 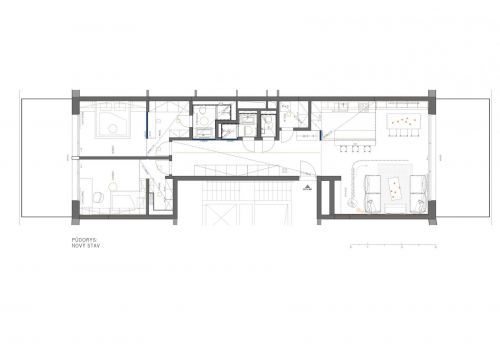