The building of the small hydroelectric power plant was built around 1930 and is located in the Vysočina region near the town of Třebíč. The building stands on the edge of a small settlement among other houses. It has a beautiful genius loci, it has a beautiful old drive full of water, it has a beautiful small green garden, which is adjacent from behind. Definitely worth rebuilding it… or even saving ? The operation of the power plant remained uninterrupted. On the ground floor there is a large engine room without a ceiling flap, so there is space to create an attic. The brick part of the building is in very good condition, the roof and trusses will be replaced. We have a beautiful workshop divided windows repaired and contemporary replicas made. After the modernization, several beautiful artifacts remained in the engine room, which we will definitely use - an old oak sluice, a large cast iron flywheel from a turbine. The drive, which passes under the building, caused slight changes in the statics, and mainly spills out of its riverbed several times a year and floods the surroundings, including the building.

We had to plan a reconstruction of the building. That means that we had to adjust its cloak and roof as well. Although the main task was to build a house for the administrator, respectively a thee room with a kitchen and a bathroom. An important factor was the requirement to create a winter garden (terrace).

The main architectural plan was to expand the residential zone. We designed a 12 x 4 m large prism, made in principle of steel C profiles. We added it to the building and laid it on one of the stone walls delimiting the watercourse in the drive. We pulled the southwest façade over the shorter side of this prism so that the extension of the façade hid the new steel extension. In this way, we gained a generous living room area and thus created a terrace directly above the drive. It is private, hidden from the views of passers-by, and at the same time in the poetic environment of a watercourse - the most beautiful place of construction. From the southwest side, where the main entrance to the building is, we stretched a concrete staircase, which not only forms a natural connection with the longitudinal road, but also partially eliminates any flooding of the building with water.

Due to the fact that the newly created residential part will be used only seasonally, it was not necessary to insulate the building. On the contrary, we restored the original lime hand-smoothed plaster with lysine elements. The roof with folded sheet metal was also made with the truss, with reference to the original sheet metal roofing. We had replicas of the workshop windows and doors installed throughout the building. The floor of the 2nd floor is supported on a grate made of IPE steel beams, which are visible from the 1st floor together with a flap made of solid boards. We also used basalt tiles for the floor on the ground floor, the floor in the attic is made of wooden three-lamella. We applied the same hand plaster on the walls as in the exterior. Due to the fact that the power plant is still in operation, the inner wall between the engine room and the background of the administrator is anti-noise.We also designed the interior equipment to measure with an emphasis on originality and industriality. For example, metal lamps, a solid table and wooden chairs. The built-in furniture is white to disturb the clean linear character of the interior as little as possible.

Sitting quietly on the terrace and looking out of the window watching the turbine work for you, what a beautiful life. :-) 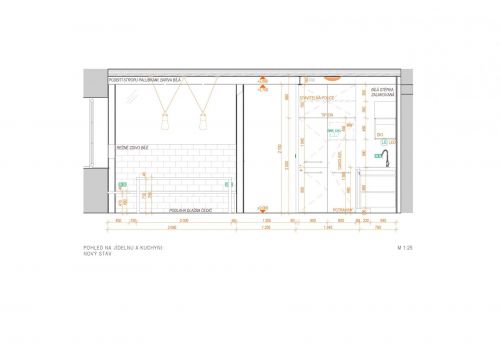 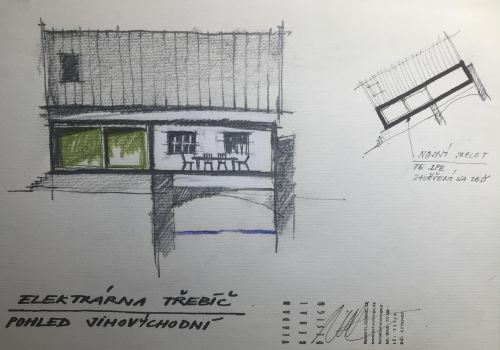 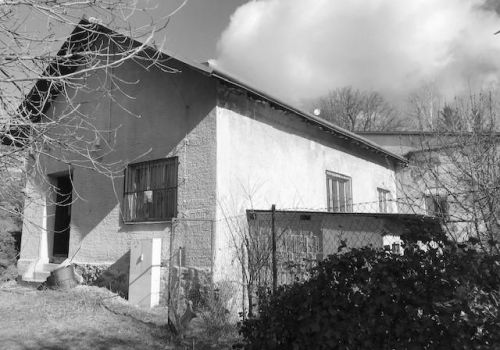